What is Tartan Day?

Each year, Scots and their descendants around the world celebrate their cultural identity with a variety of special anniversaries: on November 30th, they honour Saint Andrew, Patron Saint of Scotland; on January 25th, they celebrate Scottish literature on the birthday of the poetic genius, Robbie Burns; and on April 6th, they recognize the contribution of Scots and their descendants to Canadian life by celebrating Tartan Day

First adopted in Nova Scotia in 1987, Tartan Day spread to Canada’s other provincial and territorial jurisdictions in the first half of the 1990s, to the United States by Act of Congress in 1998, and then to Australia and New Zealand. After many years of lobbying by Scottish associations across Canada, in 2010 the Government of Canada proclaimed that Tartan Day be celebrated annually across Canada.

When the holiday was established in New Brunswick in November 1992 (to be first celebrated in 1993), then-premier Frank McKenna proclaimed that “Scottish immigrants and their descendants have played, and will continue to play, a major role in the development of the Canadian and New Brunswick identity. Therefore, it is with great pleasure that I declare today, April 6, and every April 6 thereafter, as Tartan Day in New Brunswick.”

In the 2010 proclamation, Hon. James Moore, Minister of Canadian Heritage expressed similar sentiments: “On this day, all Canadians will have the opportunity to celebrate and learn about Scottish culture, traditions, and heritage, as well as their contribution to Canadian society….I encourage people all across the country to celebrate on that date [April 6th] the contributions of millions of Canadians of Scottish ancestry in building our country.”

It is with this sentiment in mind that the New Brunswick Scottish Cultural Association asks each and every person of Scottish descent to don their tartan to commemorate this important day. Please visit the NBSCA Events Calendar to see how your community will be commemorating Tartan Day.

On 6th April 1320 the Scottish nobility, following the Second War of Scottish Independence, issued the Declaration of Arbroath. This document was forwarded to Pope John XXII in Avignon, France, establishing the historical independence of Scotland and the rights of the Scottish people (though ‘people’ at the time was not so all-encompassing a word as we might suspect) to choose their own monarch – no matter how vehemently the King of England claimed otherwise. It is, perhaps, the most important document in Scottish political history, effectively the Scottish “declaration of independence.” On Tartan Day we celebrate our freedom to acknowledge and to celebrate our Scottish heritage. 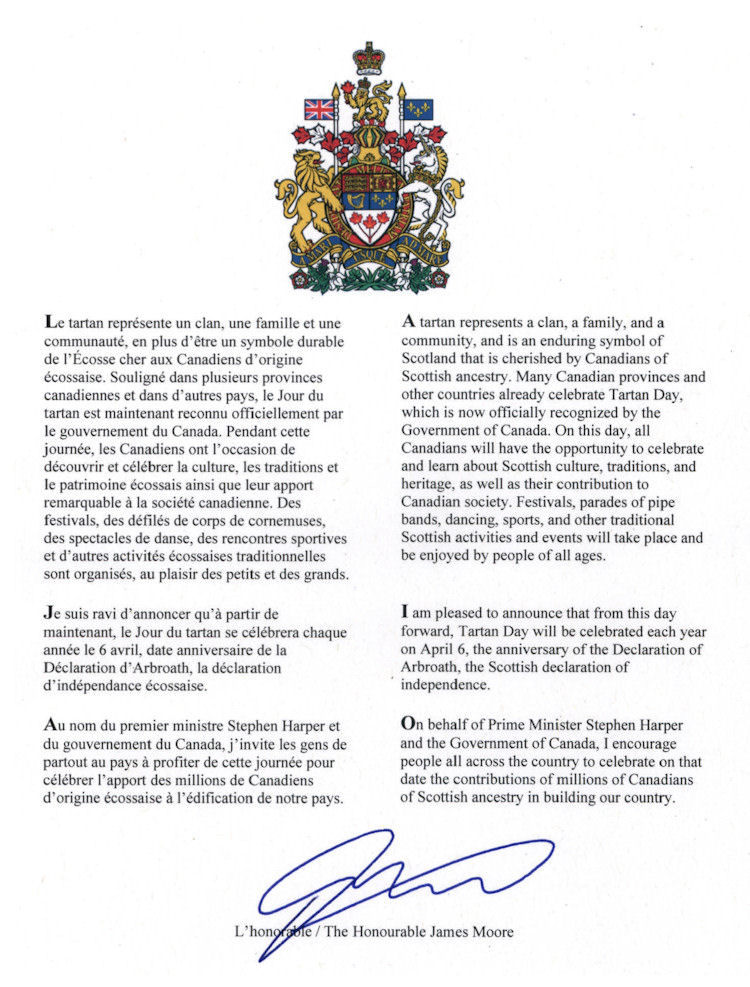 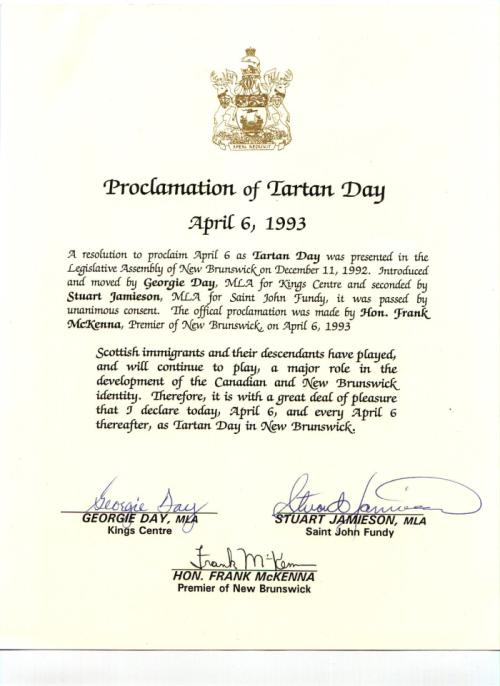